Original All Hallows position: South side of chancel

Current Inchinnan Parish position: This window is unaccounted for

There is no photographic image of this Window as it is not accounted for. 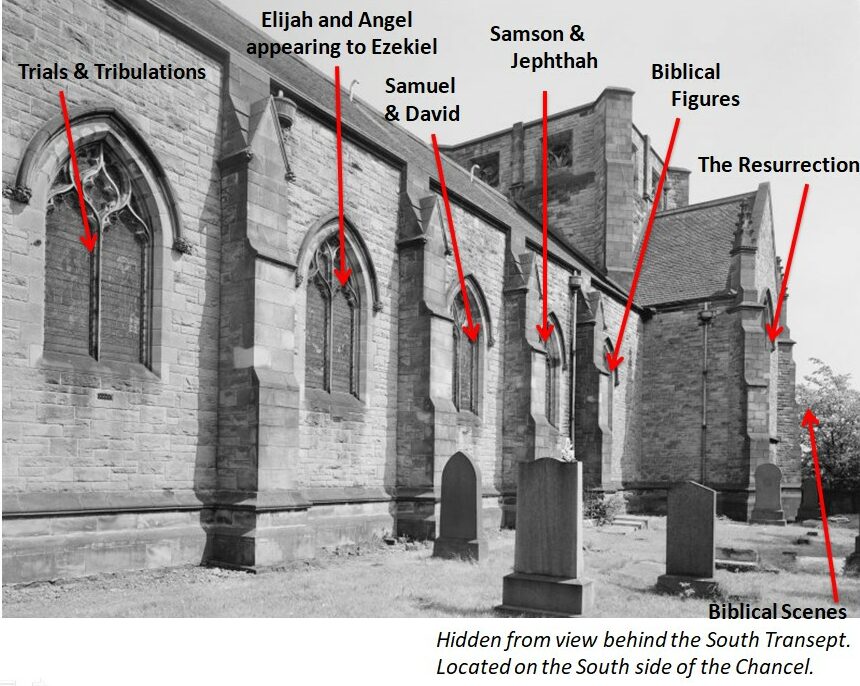 Position: All Hallows: South side

Biblical Text: “and their eyes were opened and they knew him.”

The left hand window depicts the Risen Lord and before him two figures are seen. One is seated looked up with an expression of awe and amazement and the other standing arms raised but facing downwards as if he cannot look up perhaps because the situation us too intense and overwhelming. The figure of Jesus shows calmness but sadness in the face and the right hand is raised in blessing. Around the figures arches the branches of old vines and at the top they are laden with grapes and Jesus is holding something, perhaps bread to signify the breaking of bread and the grapes to represent wine. Below the figures it is written and their eyes were opened and they knew him.
The window on the right shows the same two figures standing apparently deep in discussion. The background is the same but at the back there is part of the entrance to a building, perhaps where they broke bread together. There is no written text in this window.
It is so unfortunate that some of the windows of All Hallows Church, this being one, were lost at the time of the demolition of the church. Each window tells a story beautifully illustrated. The design and manufacture are those of master craftsmen and artists.

Adoration of the Risen Christ

Moses and the Burning Bush