What is opus sectile?  The literal translation of this Latin phrase is cut work, but in glass making it refers to the pieces of “broken glass”.

Opus sectile was known in the ancient Roman, Byzantine and medieval world where materials were cut and inlaid into walls and floors to make a picture or pattern.  Common materials used were marble, mother of pearl and glass.  The materials were cut into thin pieces, polished, then trimmed further according to a chosen pattern.

During Victorian times the technique was rediscovered and brought to a very high art form by James Powell and Sons who first started experimenting with the technique in the 1850s.  This is the firm which made the opus sectile mosaics for All Hallows and is in fact the only manufacturer of such work within the building. Indeed, this statement can also be applied to all of the stain glass windows as well.

All of these items contain opus sectile in their design and came from All Hallows church after its demolition in 1967.

located in the sanctuary

Fumigated oak. Three opus sectile and lapis lazuli panels on the front and one on each end
with a decorative band around the top.  In All Hallows church this table sat on a black marble
slab which did not come to the new church. 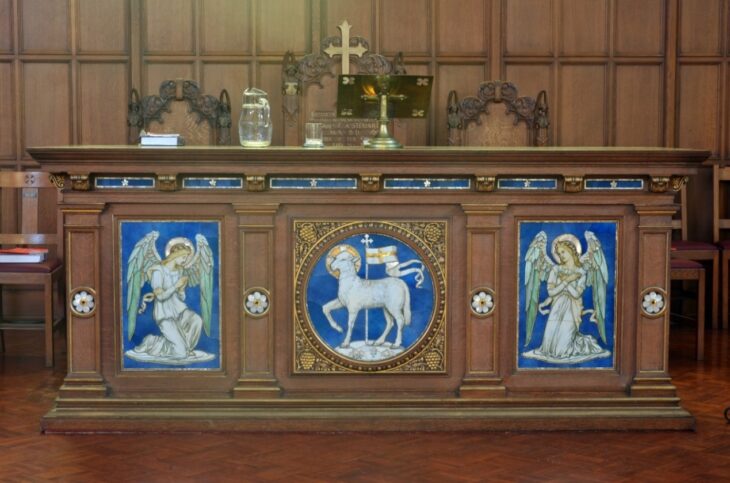 The central panel is the Lamb of God. This comes from the Hebrew sacrificial system and is applied in the New Testament to Jesus. The Lamb carries the banner of victory, a white pennant with a red cross on a cruciform standard, and suggests that the Lamb of God, offered in sacrifice, is now triumphant. The side panels depict angels kneeling in devotion.

The opus sectile panels on each end of the communion table depict,

located in the sanctuary 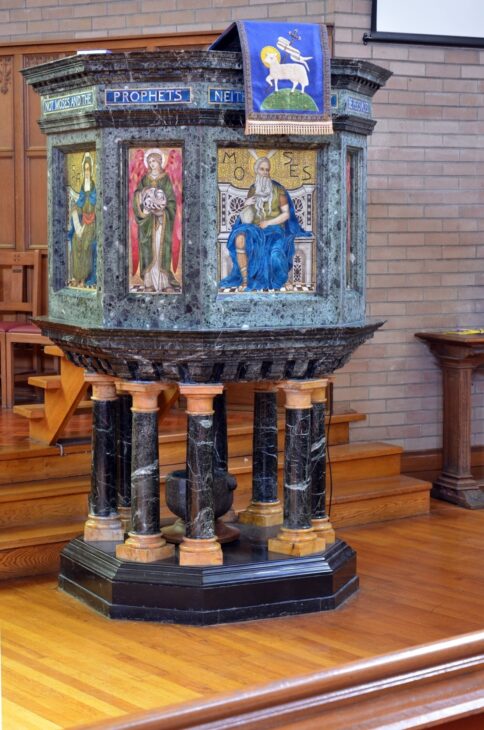 Green, Black and Sienna Italian marble with three opus panel figures of the prophets Moses, Isaiah and Daniel and four corner panels of angels holding convex pearl circles with emblems of the evangelists engraved upon them.

Text worked in pearl lettering on a blue opus sectile and lapis lazuli background round the top reads;

“IF THEY HEAR / NOT MOSES AND THE / PROPHETS / NEITHER WILL THEY / BE PERSUADED / THOUGH ONE ROSE / FROM THE DEAD.”

The original bronze pedestals were not refitted to the  pulpit pillars when installed in the new church.

An ancient christening font is displayed within the pillars. 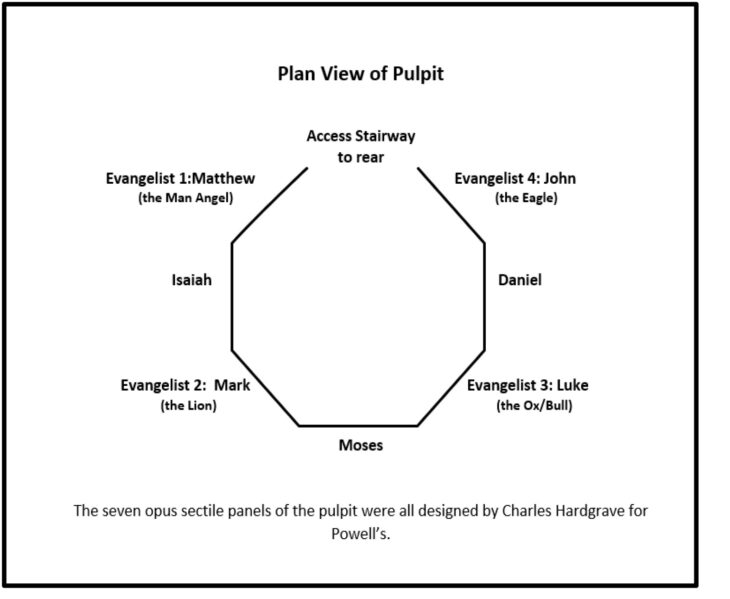 In their respective opus sectile pre-Raphaelite depiction, each of the prophets has either a book or a scroll opened, and the quotations thereon come from the King James Version of the bible. The significance of each is explained: 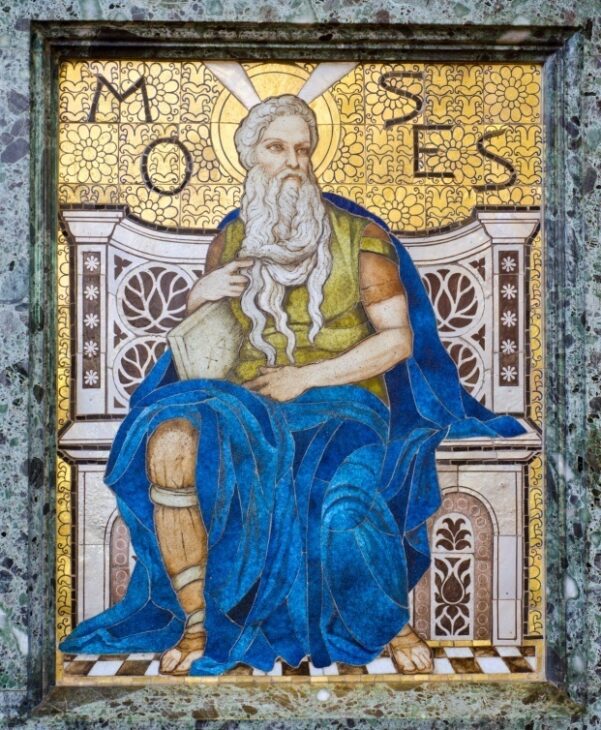 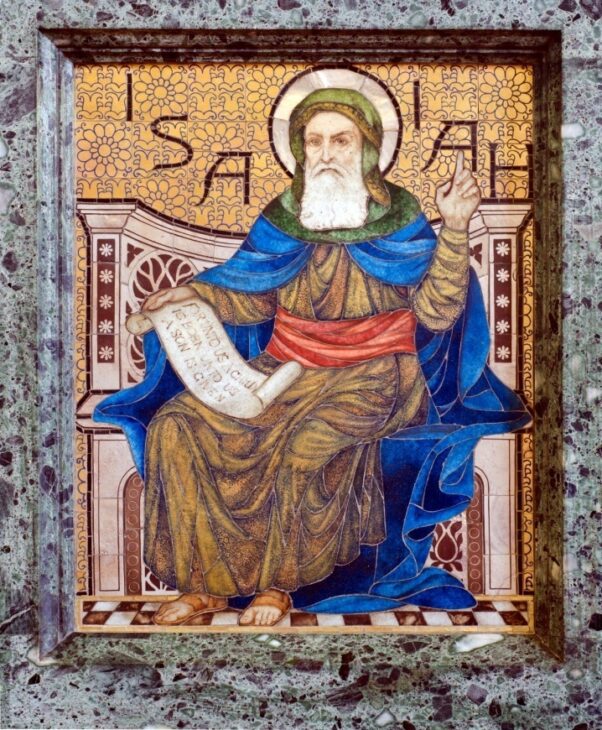 The King James Bible states several times that a child was born
“unto” someone specific such as Abraham, Enoch, and Eber.
Jesus was not born unto Joseph and Mary. He is the world’s Saviour
and servant King. He was born unto us because he came to save us. 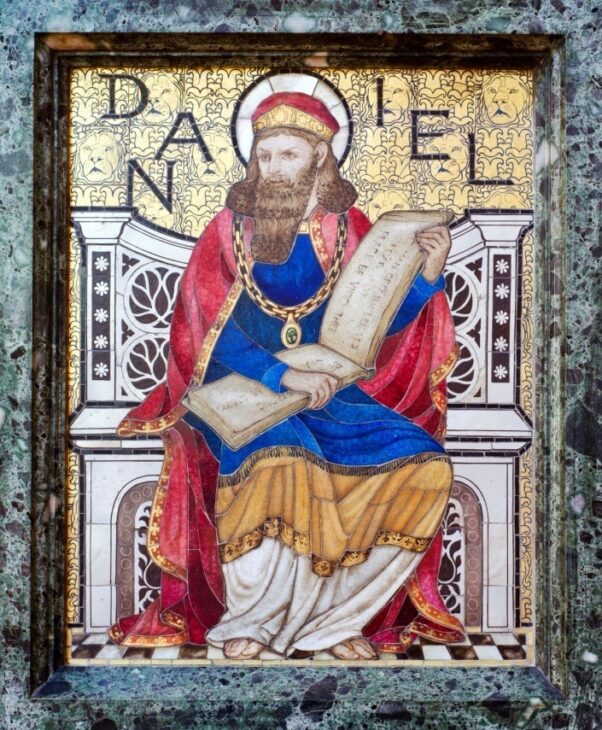 “O, man greatly beloved, fear not: peace be unto thee, be strong, yea,
be strong.”

The angel of the Lord spoke these words to Daniel to strengthen him.
God by his word puts life, and strength, and spirit into his people;
for if he says “be strong”, power goes along with the word.

The four evangelist are depicted as red winged angels holding orbs made from convex pearl circles, engraved with each evangelist’s biblical emblem.
Red winged angles symbolize internal balance and healing. The appearance of red-winged angels means that a greater spiritual force is entering life to restore balance and harmony. 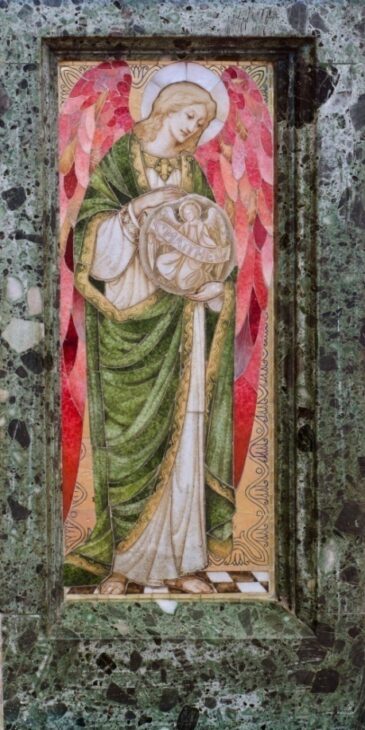 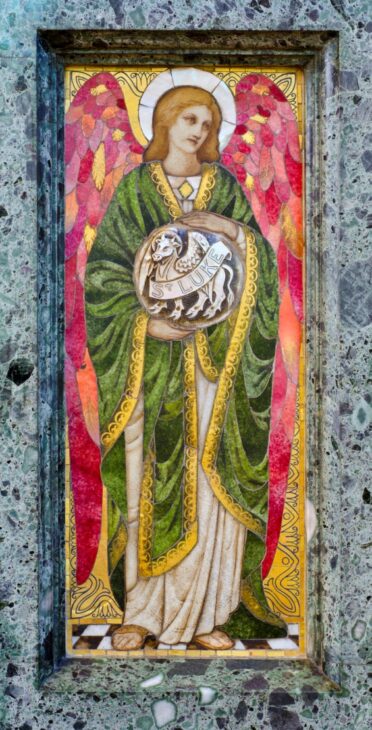 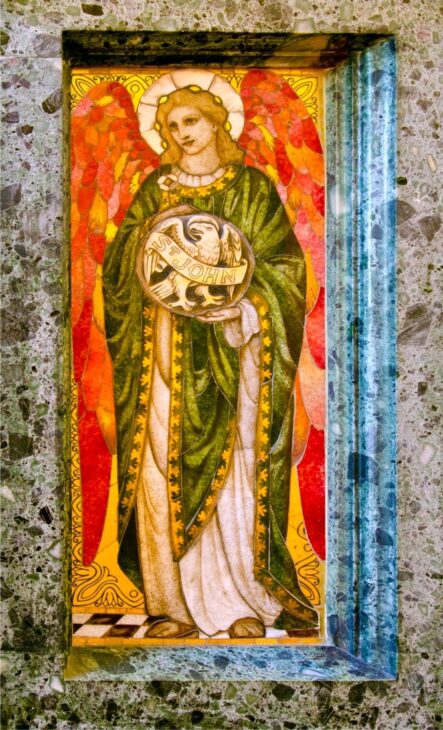 The orb engraving was carried out by Edward John Hillebauer (jnr), glass engraver, whose workshop was adjacent to Powell’s glassworks.
The orb engravings are from paintings drawn by Miss Emily Harrington.The evangelistic emblems within the orbs, are also incorporated into the upper section of the five-light chancel window, within the “daggers” which form the top circle, surrounding the dove of peace.
The orb is representative of the world. And the subject matter is drawn from Ezekiel 1:10, with further reference in Ezekiel 10:14 and Revelation 4:7.

(All photographs above, courtesy of Mr Campbell Craig)

located in the vestibule at entrance

All heraldry work is opus sectile. 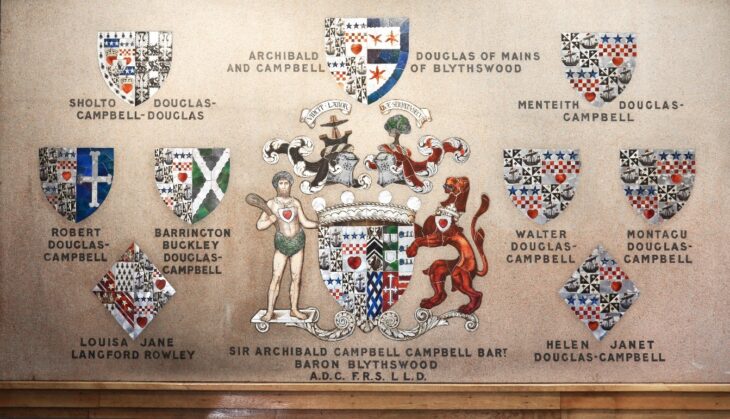 located in the vestibule on rear wall 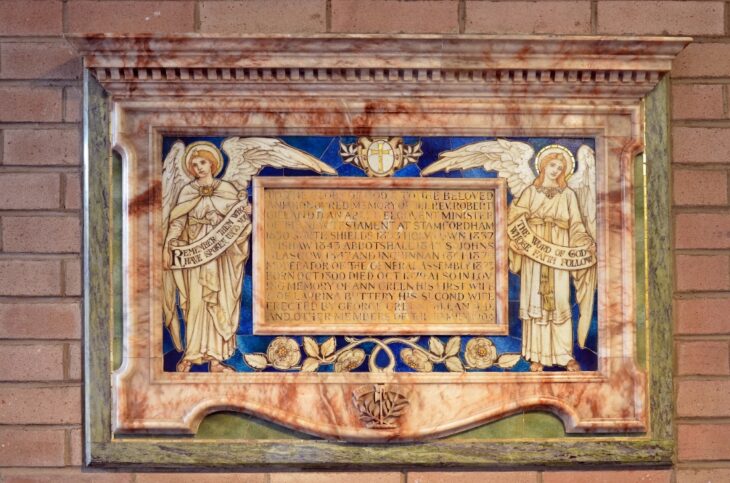 This tablet is in three parts:

Photographs showing artefacts in situ within All Hallows 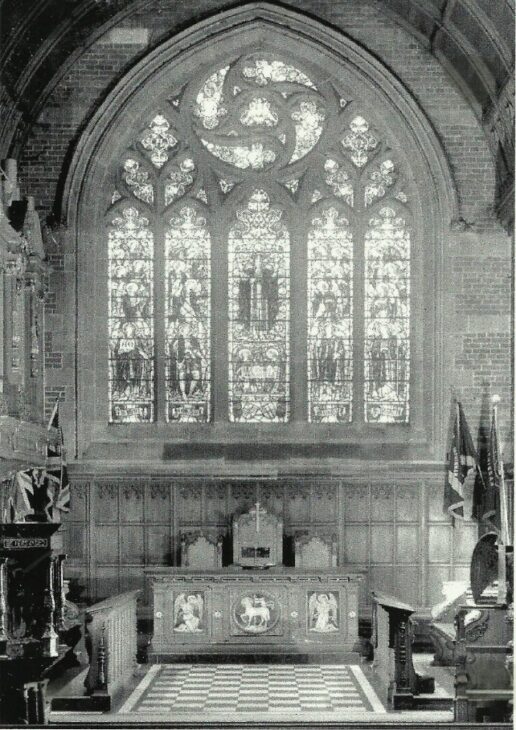 This photograph shows the chancel of All Hallows with the communion table sitting on a black marble slab, the main East five-light window, the organ, choir stalls, pulpit, lectern and christening font.

All Hallows church was set out in the traditional manner with the chancel facing East.

The Bronze pedestals of the pulpit pillars can be clearly seen.  As previously mentioned, they were not installed when the pulpit was removed to the new church.

The font and (as previously mentioned) the black marble slab were not moved to the new church. 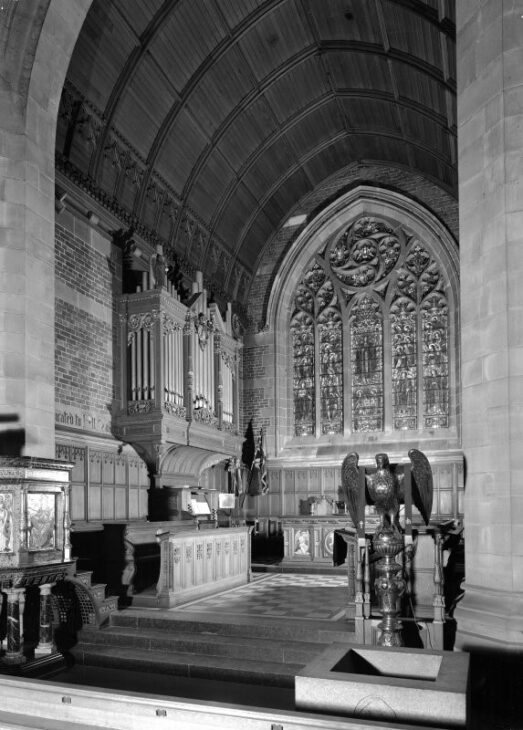 The pulpit and lectern can also be seen in this photograph.

They have been installed in the new church on opposite sides of the chancel. 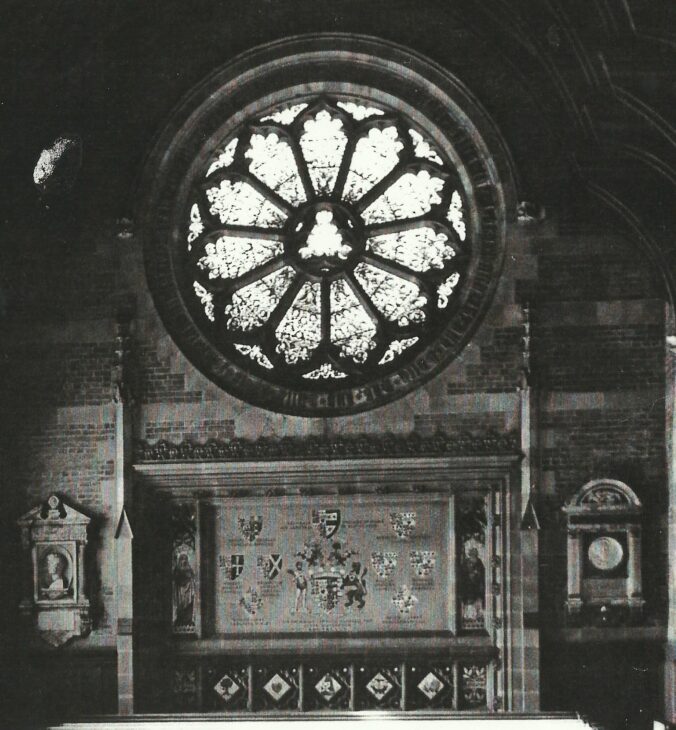 Viewed from the minister’s prayer desk located in the chancel, the Blythswood Armorial can be seen on the west wall, beneath the Rose Window, with five opus sectile panels below and one on each side.

Depicted on the side panels:
Panel, left side:   St Bride
Panel, right side: St Columba

None of the surrounding opus sectile panels or the two busts were moved to the new church.

A faint inscription can just be made out on the stonework around the Rose Window. The words are from the Book of Revelations 1:8 :

“I am Alpha and Omega, the beginning and the ending, saith the Lord, which is, and which was, and which is to come, the Almighty”.

Photographs of the font and an article describing its discovery in 1930. 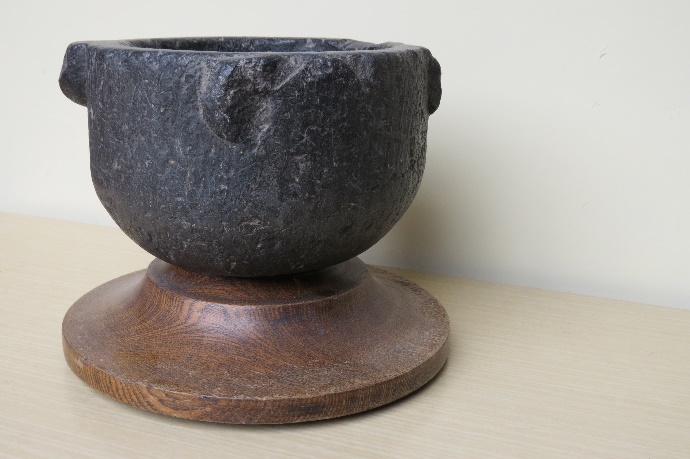 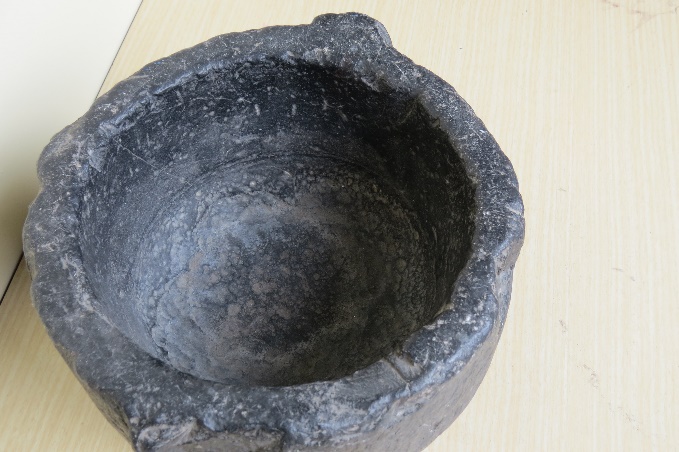 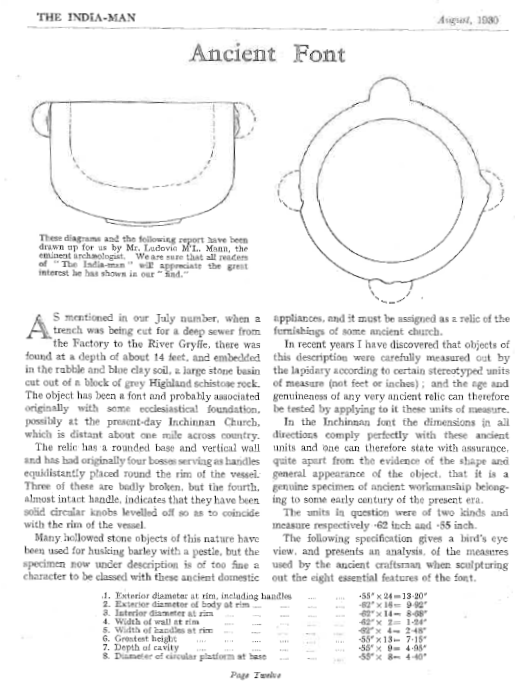